Back in November I tweeted something I shouldn’t have, so I am forced to begin by acknowledging the possibility that I have Heisenberged this whole situation right up. 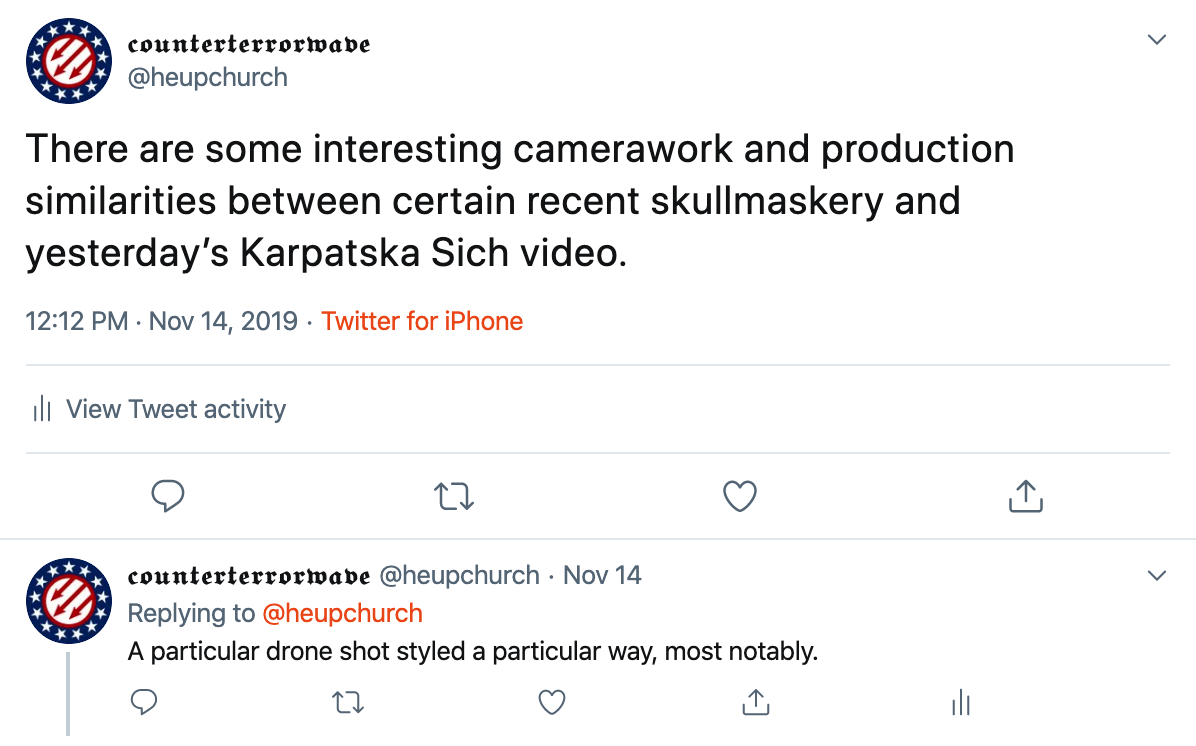 This time I do not know for sure if the boys are winding me in particular up or if I actually saw something important, but you go to war with the imagery you have.

On 21 October 2019, I had come out with an assessment that, between the botanical signatures and the bilingual release, Fission was likely filmed in western Ukraine. Fission was most notable because of the enormous leap in production value, up from the grainy stuff put out by original AWD and more recently by the Base to a Peak ISIS slickness. This suggests both financial resources and freedom to operate: the video is professional-quality and likely was produced professionally. AWD in the US is under heavy scrutiny from law enforcement and is unlikely to have the operational breathing-room to be hiring a quadcopter videographer to make fancy propaganda. Between the Russian invasion of the Donbass, the weakness of Ukrainian state apparatus, and that bastard Avakov, however, Ukrainian neofascists have much more room to operate openly.

Why I Tweeted Something I Shouldn’t Have

On 13 November 2019, Karpatska Sich released a video with camerawork that might look suspiciously familiar to anyone who has seen the AWD Fission video: the HD camera and tracking drone shots stand out. Not only does the equipment appear similar, but the composition of the overhead shots tracks across the videos: both feature a high overhead shot of people marching through a narrow space. The similarities don’t translate well to screenshots unfortunately, but I will not be embedding terrorist propaganda videos in this post so the screenshots will have to do for now.

None of this is conclusive, but it wants close watching.

There is a lot of old B-roll of protests in the video. For my purposes, only the recent footage of the march was particularly useful, as it may help narrow down the location of future videos. The drone footage was filmed in Uzhhorod along Ploshcha Koryatovycha Street.

There is also a shot of some mountain hiking which I have been unable to geolocate. If any of you who are really good at finding mountain peaks have a shot at it and get something, let me know, because there’s a dry-mesic broadleaf forest I’d really like to find if possible. 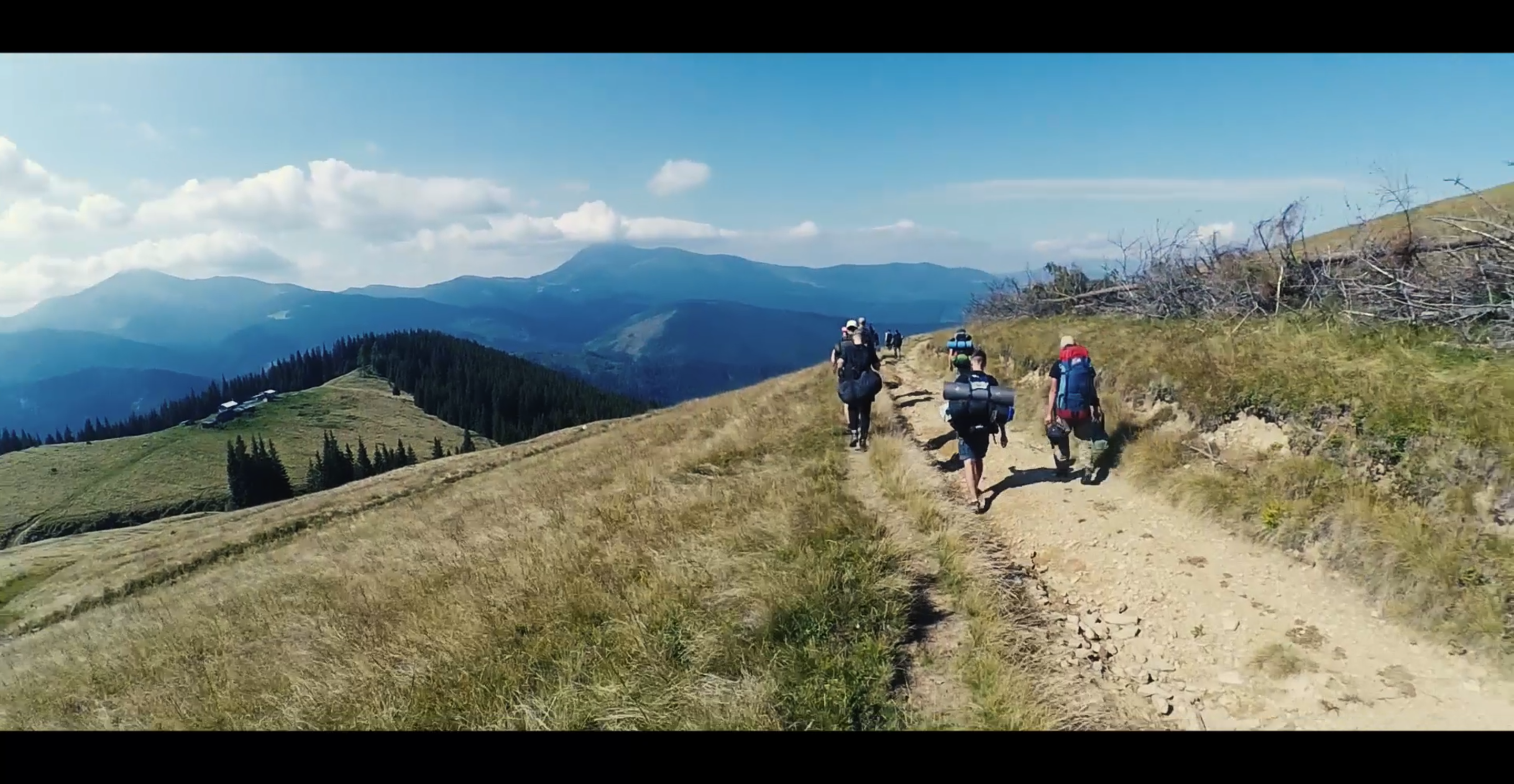 On 10 December, the same channel that released Fission put out a video called “AWD Galizien: Grey Zone”, in which some skullmasks stand in front of a wall monologuing, intercut with footage of various Ukrainian militants. Much hay was made of the fact that some of the guns appear to be airsoft, leading to some amusing butthurt as the terrorwave guys found out they’d been Calibre Obscura’d. However, amidst the airsoft of it all, the most interesting feature of ‘Grey Zone’ was overlooked: the slick new footage from the Karpatska Sich video made an appearance at the end.

I will spare you all of the comparison shots and just pull out the one that I find most interesting:

The lion shield on the banner is the insignia of the 14th SS-Volunteer Division “Galizien”, which was composed primarily of ethnically Ukrainian recruits from Galicia. The makers of the video clearly intend to associate AWD Galizien with the Karpatska Sich demonstrators. Also of interest is the Praviy Sektor Volunteer Battalion flag (red-and-black banner with rifle emblem) at the left.

The insignia on the monologue artist and his friends also serve as affliation claims. Whether they should be taken at face value remains to be seen. 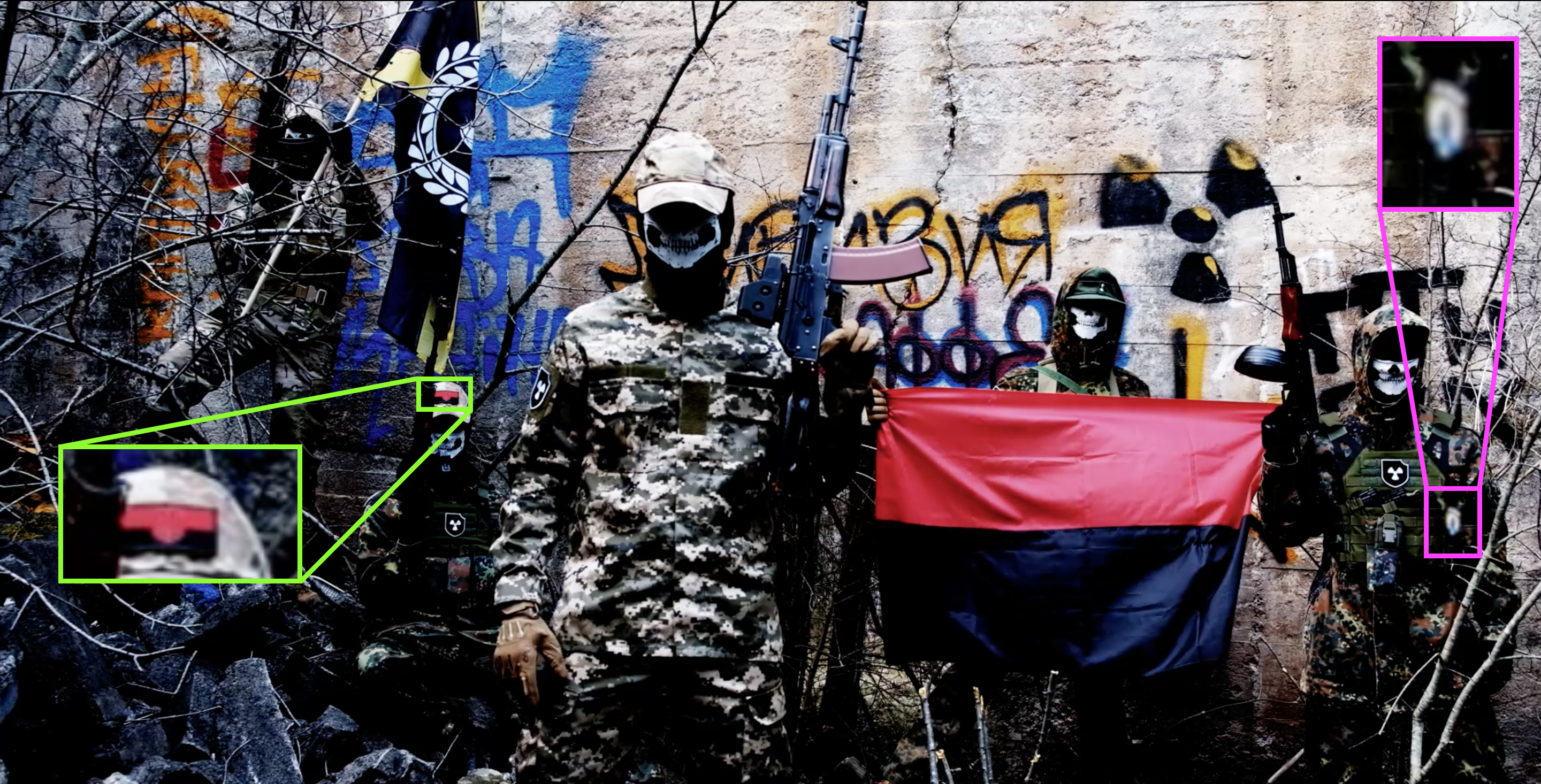 The UPA flag is common across Ukrainian nationalist groups, and is not very informative on its own. The hat patch (green) on the third skullmask from the left appears to be Praviy Sektor insignia. Something white and symmetrical has been blurred out of the center, most likely the white tryzub that distinguishes the Praviy Sektor flag from the UPA flag. The last skullmask on the right is wearing a poorly-blurred Azov patch (purple).

Regardless of whether we choose to believe it, by using these insignia and blurring them out just enough to draw attention but not enough to make them unidentifiable, the makers of “AWD Galizien: Grey Zone” wish us to believe that they have Karpatska Sich, Praviy Sektor, and Azov members among their ranks.

Message To De West: Get Sillay

One last thing: if you boys read this, you can tell Mason he needn’t bother. If I could get this far with three videos, a botanist, and tourist-tier Ukrainian, you and your extensive European networks know damn well where Fission is coming from. Stop playing coy. It’s just embarrassing.